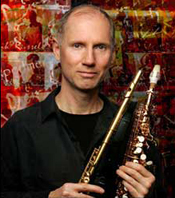 It is most probably a fact that most flute makers do not get to know much about what the flutes they have made get up to once they have left their workshops, but there can be moments of exception.

One such moment came Martin Doyle‘s way recently when he received a very encouraging and inspirational message from veteran musician Premik Russell Tubbs regarding an event that Premik was involved with in January of 2015. That message, in part, is as follows:

[…] If you remember, back in 2000, I became the proud owner of one of your [Celtic style] African Blackwood flutes. I wanted to let you know that that lovely flute was heard last Monday night echoing throughout Carnegie Hall! I participated in a work by composer Karl Jenkins called “The Peacemakers“. It’s a wonderful piece which uses quotes by Martin Luther King, Gandhi, Mother Theresa and many others, which the composer weaves beautiful orchestrations and choral arrangements around. That night, I was the ethnic flute guy, playing Indian bansuri and Irish flute. It was a most special experience that I wanted to share with you.

Very kind of Premik as we humans tend to thrive in an environment of encouragement no matter what our station in life. Here is a clip of Karl Jenkins talking about recording The Peacemakers.

This site uses Akismet to reduce spam. Learn how your comment data is processed.

Martin Doyle is an Irish flute maker whose simple system wooden flutes (aka Irish flutes) have become renowned for their ease of playing and quality of tone.

Born in Dublin, Ireland, Martin Doyle grew up in the seaside town of Bray in County Wicklow. One of four children in a family with music in their blood, Martin was influenced and inspired by his mothers melodious singing from a very early age – learning songs that have stayed with him to this day.
Read more: About Martin Doyle »